Can a MyGov ID be Proof of Signing?

Concerns from Software Developers and Tax Practitioners have been raised regarding the wording of the SBR declarations by the reporting party or intermediary. The issue is in regards the use of the "I" statement, where misinterpretation could be made that the individual pressing the lodgment button on the software is the one who prepared and is responsible for the return. However, as per industry common knowledge and practice, in many cases returns may have been prepared by the authorised Tax Agent but are only lodged by an associate or administration professional within that Tax Agent practice - thus the "I" statement could potentially be misunderstood.

In these cases, the end user would not agree to what is worded in the declaration because they actually did not prepare the return. The individuals lodging the return are nominated and authorised by the Tax Practitioner to lodge on their behalf.

The digital signature produced by the use of a MyGov ID is an approved electronic signature (see PS LA 2005/20 Signature Requirements for Approved Virtual Forms, Which are Forms Which are to be Lodged Electronically or Given by Telephone).

Therefore when lodging an approved form via the ATO approved channel, the MyGov ID constitutes the agent's electronic signature.  As the form is being provided electronically, in accordance with section 388-70 of schedule 1 to the TAA and PS LA 2005/19 Approved Forms, the agent must declare that:

-the document has been prepared in accordance with the information supplied to them;

-the agent has received a declaration from their client stating that the information supplied is true and correct; and

-they are authorised to give the document to the Commissioner.

The above is applicable for electronic lodgment authorisations via:

A specific Tax Agent Declaration signature is not actually required for the following reason.

The permissions given to the Tax Agent by the Taxpayer that are stored in Access Manager, provided the tax agent with the right to submit the form on the client's behalf. 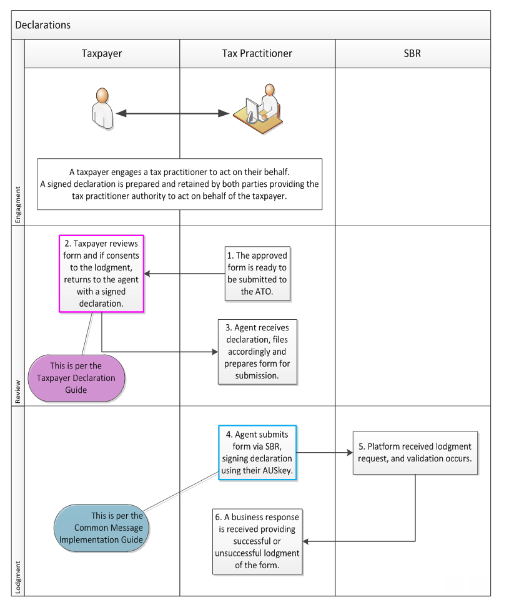 So provided the Tax Agent has received a signed declaration from the Taxpayer which has been submitted to the ATO and stored in Access Manager then no actual agent signature is required to be appended to the form.

How to Secure MyGov ID

Did you find it helpful? Yes No

Send feedback
Sorry we couldn't be helpful. Help us improve this article with your feedback.